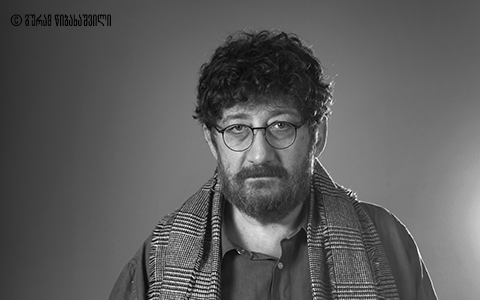 Levan Tsuladze occupies a leading position in the contemporary Georgian theatre scene with his avant-guard productions. This is borne out by dozens of successful plays staged across Georgia and beyond it, local and international premiers and enthralled viewers who flock to see his works.

In the 90s together with his colleague-friends he initiated the creation of the first independent theatres in Georgia (first on the Rustaveli Avenue, later in Vake, both in Tbilisi) called Basement Theatres. Later, in 2006 he took over the role of artistic director in the Tbilisi Marjanishvili Theatre where he gave a whole new perspective to the theatrical representation and the use of stage space and created 2 other “theatres” within its walls.

Levan Tsuladze continues to search avenues to find various ways of representation and work closely with the new generation of artists to delve into variety of genres and styles such as drama, sad comedies and tragicomedies by staging authors across the spectrum ranging from Shakespeare, Goethe, Thomas Mann, Brecht, Chekhov, Kafka to Georgian authors Kakabadze, Batiashvili and Bughadze. The scope of his creations manifest his multifaceted artistic nature for which there are no obstacles and if there are, there are proven ways to cope with them and if there are no such ways they can be invented.

He has a rare gift of reflecting his own nature and qualities (not his stand or views) in his creations. His plays continually show him as a person, convey his love to people, the ability to make their problems his own, make promises, keep his word, and instill hope that all will work out.

The performances in the Basement Theatre: