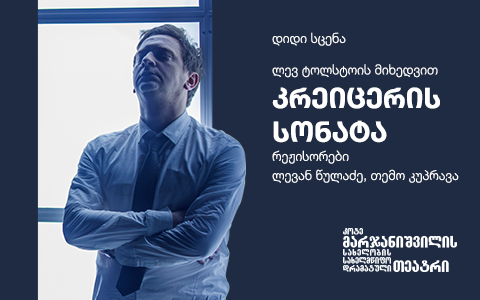 About Performance:
Why does a man marry? Because he’s in love. He might meet a woman he likes and decides she is the one and only, created for him, thus must belong to him till the end of times. In fact, it might be that he is attracted by her cleavage, or how her dress shows her curves, or how the wind blows her locks. His instinctive desire is to be with her, see her all the time, spend all his life with her. The woman might feel the same, so they get married. Seemingly, the aim is achieved, their wish comes true, but suddenly they discover they have nothing in common apart from physical attraction. In about a couple of months two selfish individuals find out that a family and a marriage are one big misconception. They lie to each other, as well as to themselves. They cheat on each other, but it could be acceptable if they forgive disloyalty. However, if they demand fidelity, or wish to separate but still live together, that’s when all hell breaks out. That’s when they start to drink, commit suicide, kill each other, poison others and themselves too...